For the last two weeks or so, the Aromaboy has been on my mind. An electric coffee brewer which takes up as much space as my kettle, the Aromaboy has a delightfully retro feel, which is most likely a result of this brewer being in production since 1979. The retro aesthetic this brewer has was a large part of why I bought it, but I also thought about the recommendations I had received. I asked a few people whether they thought the Aromaboy was worth the money even if I liked to brew coffee by hand and everyone with whom I spoke recommended I give the Aromaboy a try.

The outer shell of the Aromaboy is mainly plastic, featuring the Aromaboy brewer itself, a carafe, and a Mllitta brewer which goes on top of the carafe. There is also another plastic piece which is a lid for the carafe. I like the fact a lid comes with this brewer because that should help keep the coffee warm. Keeping the coffee warm was not a problem for me though: I drank my first brew very quickly. 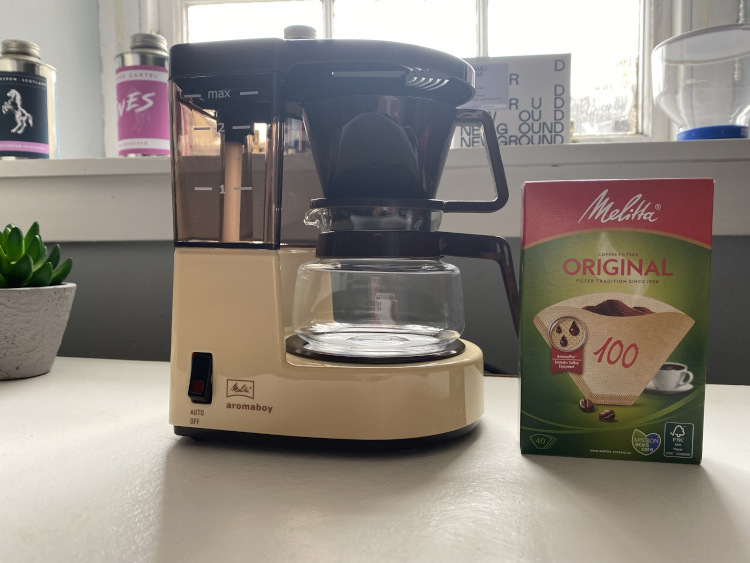 I started by pouring water into the brewing chamber. The carafe that comes with the Aromaboy is good for filling water into the chamber. I filled the carafe up with water and then poured it into the Aromaboy until I reached the number "2", which I believe marks how much water you need for two cups. I then flipped the switch to turn the device on and realised that water came flowing out of the brewer very quickly. I hadn't even ground my coffee.

I turned the Aromaboy off, ground my coffee, folded the filter paper for the Melitta brewer, and then put the coffee in the brewer. After doing this, I returned the Melitta brewer to the top of the carafe and turned the machine on again. At this point, I knew that the water would start to pour out quickly. In the future. I will definitely prepare my basket first. It may be worth doing a quick rinse of the filter before putting coffee in (which may help with temperature) but I have not used the device enough to make any recommendations on usage.

The Aromaboy dispenses water into the Melitta brewer at a steady rate. I heard some gurgling sounds as the water was dispensed which I found quite comforting. I could hear the brewer at work. I stirred the coffee after enough water was in the brewer to make sure that the grounds were saturated and then I left the brewer to do its thing. Toward the end of the brew, I kept my eye on the machine, ready to turn it off when I had used up all of the water in the machine.

Within a few minutes of turning the machine on, I had a freshly brewed carafe full of coffee. Oh, did I mention the carafe is incredibly cute! I don't think I did. I am reminded of American diners when I look at the Aromaboy, but this feeling is evoked even more when I look at the carafe.

How did the coffee taste? I thought the Aromaboy made a good cup. The coffee was acidic, sweet, clear, and flavourful. I do think that I need to grind a bit finer next time though. The acidity was almost on the underextracted side. I used a coarser grind than I usually would for pour-over and I think this might have contributed to the taste of the cup. I also think that some of the water I used in the bloom might not have hit the right temperature during brewing. But, these are details with which I can experiment later. I made a good carafe of coffee and I happily drank it all.

The Aromaboy will probably stay on my desk for now as I do not have enough space to put yet another coffee-related item in the kitchen. I'll take the device to the kitchen when I need to use it and then put it back on my desk when I am done. While not ideal, the Aromaboy is so small it is easy to move it from place to place. You really have to have an Aromaboy to see how small they are. The Aromaboy may be small but it is a very capable brewer.

I will need to experiment more with the Aromaboy. It may be electric but I can still control factors such as grind size, agitation, blooming, etc. to make a brew. There's plenty for me to do with this brewer.