I was thinking about how I could mix coffee and technology. After some thought I remembered the Hyper Text Coffee Pot Control Protocol (HTCPCP), a protocol defined by the IETF that describes ways in which one can send commands to coffee machines. For coffee and technology enthusiasts such as myself, the protocol is a must read, especially if you find yourself interested in operating coffee pots remotely.

Thanks to the IETF, I had a new coffee and technology project idea: implement the coffee protocol they defined.

In this post, I am going to chat about my new HyperText Coffee Pot, available on my website at coffeepot.jamesg.blog.

The HTCPCP (which is an incredibly confusing name, and which I will now refer to as the "Coffee Protocol" from here on in) is not just a few web requests. It describes its own URI scheme, headers to accept, request body contents, and HTTP methods to accept.

Indeed, HTCPCP could not possibly operate within the standard methods described by HTTP such as GET and POST. Coffee pots have unique needs and the Coffee Protocol addresses them. The BREW method lets you instruct a coffee pot to brew coffee. The WHEN method ensures that your coffee pot or any extension built to pour milk into your freshly brewed coffee is not too eager and pours way too much milk into your brew.

Because the Coffee Protocol has its own URI scheme and HTTP methods, I decided to build an actual server instead of just using Python Flask or another web framework to accept Coffee Protocol requests.

My implementation of the Coffee Protocol consists of two parts:

The Coffee Protocol Server opens up a socket. If a request is sent to coffee://james (or any other valid URI with the coffee pot name "james"), the server will process the request. For a server to be processed, a valid HTTP request must be sent with any required headers as defined in the Coffee Protocol. I shall share an example of this in the next section when I talk about the web interface for my digital coffee pot.

I have not yet implemented the PROPFIND HTTP method so I have mapped it to GET for now. PROPFIND is described in the specification using this language:

All coffee requests are saved in two JSON files:

If a GET request is made, the contents of the currently_brewing.json file are returned. Otherwise, an empty JSON object ("{}") is returned.

I prefer to brew coffee without JSON requests. Hence, I built a web interface to make coffee requests. This web interface relays HTTP requests formatted in a specific way to the Coffee Protocol server. The web interface has four functions:

Here is what the home page of the web interface looks like: 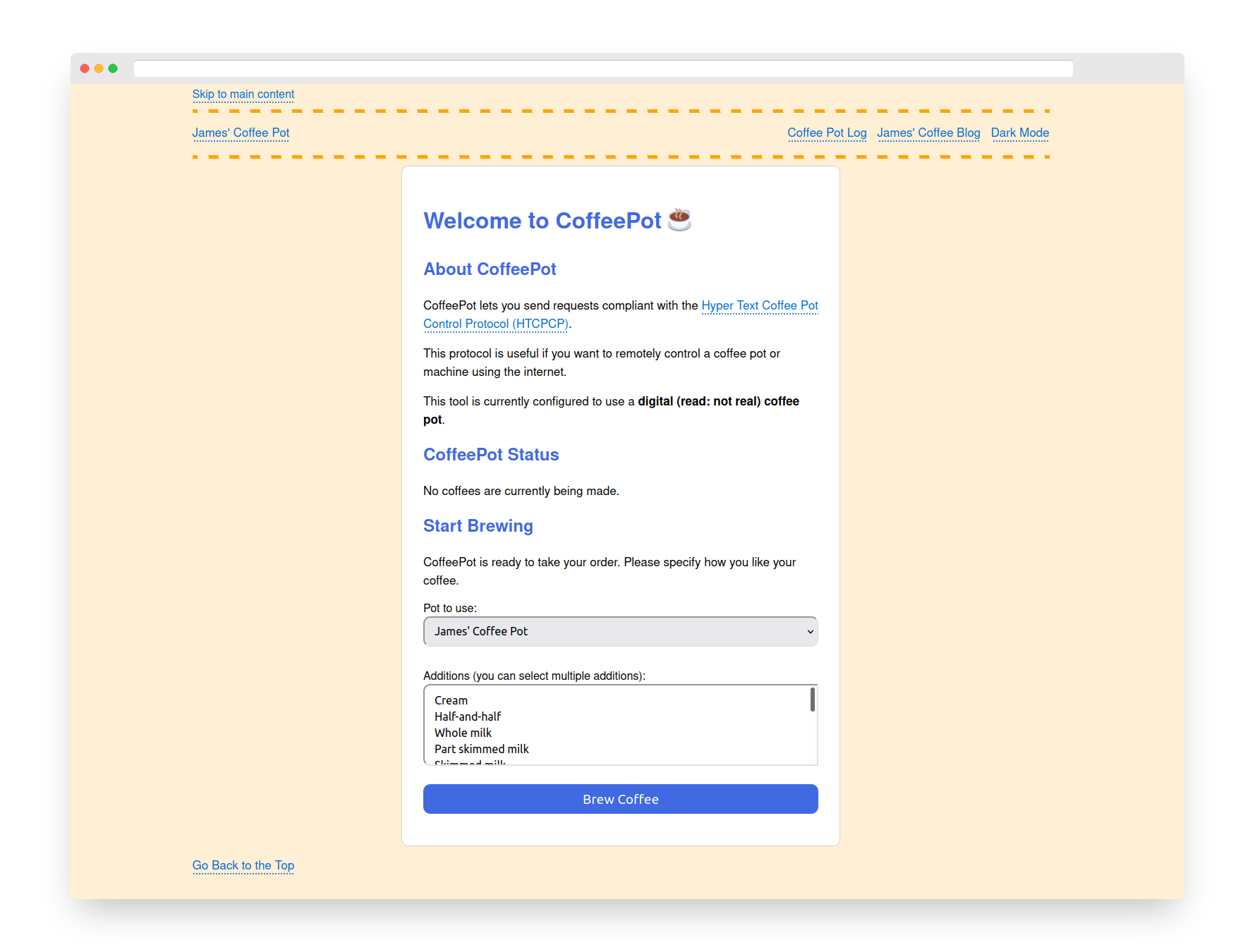 Let's say you have just woken up and want to make a brew. You can go to the web interface and specify the coffee pot you want to brew your coffee (in my case, James' Coffee Pot), and request any additions such as milk. My implementation adds a few alternative milks that are not defined in the original specification so that the habits of coffee drinkers today are reflected in my implementation.

The web server translates your desired coffee characteristics into a Coffee Protocol request. The request will look something like this:

As you can see, the BREW Method is sent to the coffee pot with the URI coffee://james. I specified that I wanted cream so the web interface has sent that request to the Coffee Protocol server using the Accept-Additions header. The post body is "start" which means I want to begin brewing a coffee. All requests must use the Content-Type application/coffee-pot-command to be considered valid by the Coffee Protocol server.

The Coffee Protocol server will then instruct the fictional coffee pot to brew your coffee.

Here is the page you see when you have requested the coffee pot to brew a coffee: 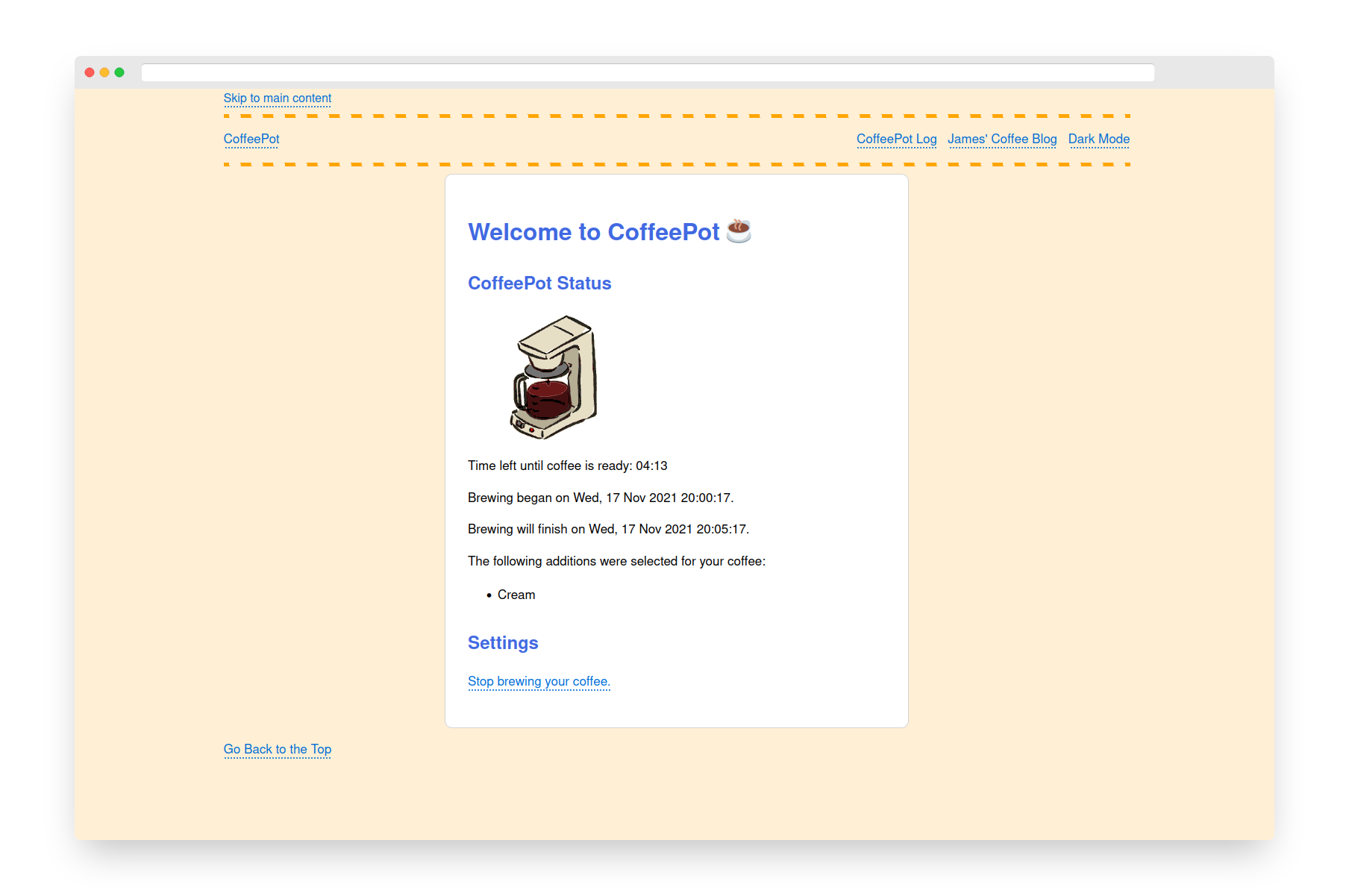 You can view the coffee being brewed, halt the brewing process, and stop pouring milk by using the web interface, too. You can only stop pouring milk when milk is actually being poured. The fictional coffee pot starts pouring milk five minutes after brewing began, as long as you indicated that you wanted milk in your coffee.

There is a timer that counts down so you can see how many minutes and seconds you need to wait to get your coffee fix (although one should wait for their coffee to cool down a bit after brewing before consuming the coffee).

The IETF protocol has made it easy for me to brew fictional cups of coffee without having to worry about what protocols and conventions I need to follow. I do think the protocol needs to be updated as it was last revised in 1998. I would advocate for an extension that lets one brew with an electric pour-over brewing device. This would require a lot of work as pour-over brewing entails a more complex procedure than a standard electric coffee pot may follow.

My curiosity for exploring coffee and technology has now been satisfied although I do still have improvements to make to my Coffee Protocol implementation. Requesting that milk should stop pouring requires further testing. You can go to coffeepot.jamesg.blog to view a live version of my Coffee Protocol implementation. You can brew coffees and see what coffees have been brewed by other website visitors.

My implementation is open sourced on GitHub so you can take a peek at the source code to learn how my server works.

Have you implemented the Coffee Protocol yourself? Have you tried my implementation and have feedback? Let me know by emailing me at readers@jamesg.blog.